(You save )
Write a Review

Osburn manufacturers stop signs in Ohio and in Florida. Give us a call today.

History of the Stop Sign
Article posted from Wikipedia

Stop signs originated in Michigan in 1915.[25][26] The first ones had black lettering on a white background and were 24 by 24 inches (61 cm × 61 cm), somewhat smaller than the current sign. As stop signs became more widespread, a committee supported by the American Association of State Highway Officials (AASHO) met in 1922 to standardize them, and selected the octagonal shape that has been used in the United States ever since. The unique eight-sided shape of the sign allows drivers facing the back of the sign to identify that oncoming drivers have a stop sign and prevent confusion with other traffic signs. It was also chosen so that it could be identified easily at night, since the original signs were not reflective. The National Conference on Street and Highway Safety (NCSHS), a group competing with AASHTO, advocated a smaller pink-on-yellow stop sign.[25] These two organizations eventually merged to form the Joint Committee on Uniform Traffic Control Devices, which in 1935 published the first Manual on Uniform Traffic Control Devices for Streets and Highways (MUTCD) detailing the stop sign's specifications.

The MUTCD stop sign specifications were altered eight times between 1935 and 1971, mostly dealing with its reflectorization and its mounting height. From 1924 to 1954, stop signs were made with a black stop legend on a yellow field. In 1954, the sign gained its current white legend/red field color configuration. Red signifies stop on traffic signals, so this specification unified red as a stop signal whether indicated by sign or by light. The mounting height reached its current level of 7 ft (2.13 m) in 1971;[25] previously, stop signs were typically mounted 2–3 feet (0.61–0.91 m)[vague] above the ground.[27] 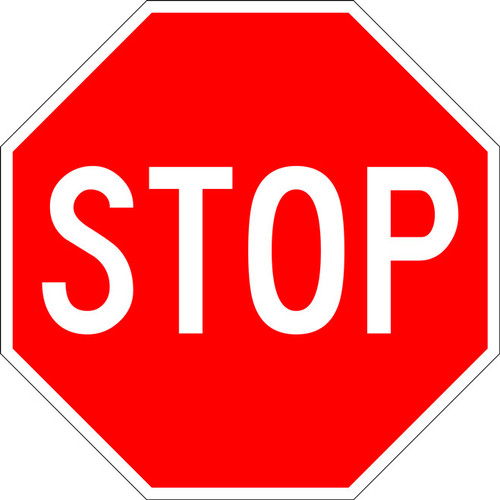